Voyage Day #6 Lots of rest and a quick plane trip

Slept from 10:30 pm til 6:30 am in cool beachside hotel room.  Sienna and I cant get over how much cooler it is in Cap Haitian than in Port au Prince.  Morning coffee with fresh mango and pineapple!
Sienna and I spent an hour or so in the ocean; the water was clear and not very cold.  Many vacationing Haitians and a few Americans.  My husband pointed out that if you want to see Haiti like a tourist, you’d better get here before the Hilton moves in and the rest of the world discovers how fabulous it is.  Our hotel room, which could easily sleep four people, cost $120 per night, including breakfast and dinner! 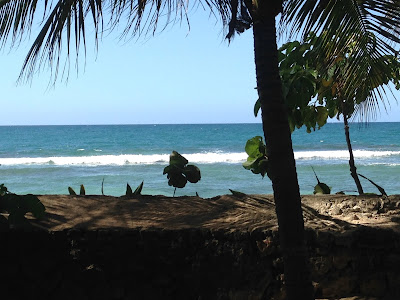 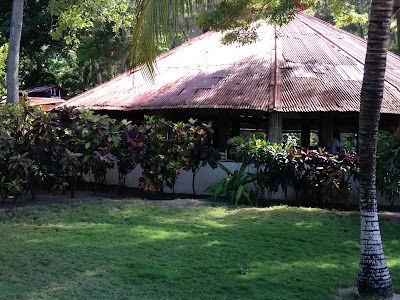 The ride to the airport, through Cap Haitian, drove through traffic only possible in Haiti.  In general there are two lanes of traffic going opposite directions.  The tap taps like to make themselves a third lane, then the motorcycles weave in and out between all, zoom around onto the sidewalk and back into traffic, or cut directly across in front of you to get around a slow moving vehicle.  At the intersection, its hard to tell who’s turning right or left because everyone piles into the center and tries to beat the other guy.  At one point we had a clear road in front of us, then a small truck ahead stopped to make a three point turn in the middle of the road to turn around.  In America, most drivers would stop and wait for the other driver to finish his turn and get out of the way.  In Haiti, the solution was to pass BEHIND  the truck, on the far LEFT side of the road.  I’m sure you can’t even picture what I’m talking about.  It defies description. 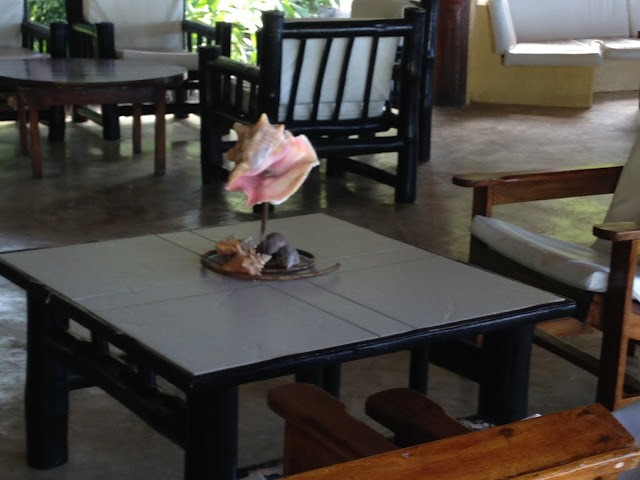 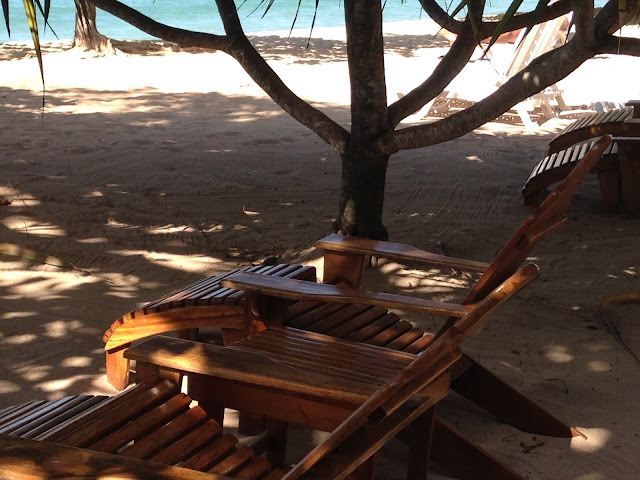 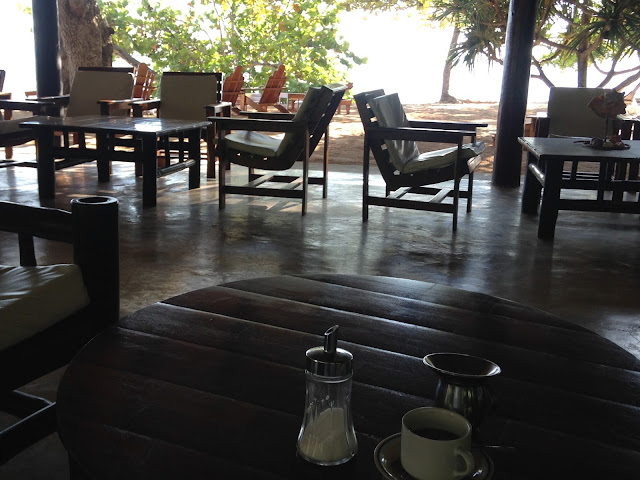 Alongside the sides of the road were every kind of store.  Kris Te La (Christ Was Here) Barber Shop.  Sang de Jezi (Blood of Jesus) Moto Parts.  Stalls and tables with every possible bicycle replacement.  Pedals stacked on one table. Wheels on another.  Gears on another.  Bike frames and wheel spokes, sold singly or together.  A store for lumber, with stacks of two by fours visible through the open door piled to the ceiling.  A tractor trailer with a load of cement bags being unloaded one by one, the first man handing a bag to a second who carried it on his head into what looked like a small warehouse, followed by another man for the next bag of cement, and so on.  Madonna Beauty Shop.  “Miroirs e 2 Vitres” painted on a business door (Mirrors and 2 Windowpanes). Why two? I thought to myself.  One stall with stacks of shoes, another with every size denim jeans, the next with t shirts.  Reminds me of that scene in Best Exotic Marigold Hotel, where Bill Nighy goes to buy replacement parts to fix his sink.  I suppose if you lived in a place long enough you would figure out where to buy just about anything.

Checking in at the small airport, Sienna went on ahead of me through security, which takes about five minutes only because the xray machine is broken and the agent must look through each bag by hand.  As I came around the corner I found a waiting room with about 4 Haitians, one uniformed ?airline pilot or crew member asleep on one of the benches, and no Sienna.  Ummm…momentarily bewildered, I could not figure out where she had gone.  I located her eventually in the bathroom and laughed at myself for being so easily confused.  On board the plane, there were 21 seats and 21 passengers, with two pilots.  No stewardesses walking through the cabin making sure our carryon luggage was “stowed entirely beneath the seat” or any sort of pre-flight check.  Just a recording, in English, with the usual safety talk about “In case of a water landing, your seat cushion also functions as a flotation device” and “in case of sudden loss of cabin pressure, oxygen masks will automatically drop from the overhead compartment”; at that statement for some reason the man next to me and I simultaneously glanced at the panel above our head and laughed.  I think we both doubted the presence of actual oxygen equipment in that tiny compartment, or whether it would actually function if it was.  Also puzzling was why the announcement was in English, with a plane full of Haitians. Another surprise  was actually seeing the runway out the front window, an unknown sight on the large jets I’m accustomed to travel in.  However, I must say it was an easy flight and despite my anticipation of being nervous,I was not anxious at all. Within 30 minutes we were descending into Port au Prince.  I could feel the heat as we dropped, missing already the coolness of the north. 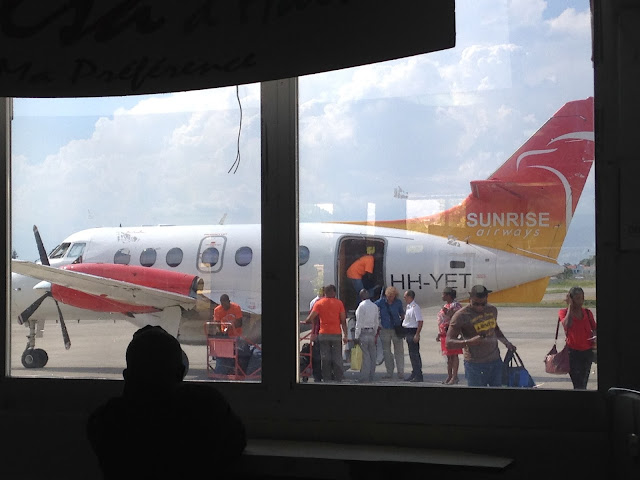 As we waited for our single bag at the airport in Haiti, the usual cluster of men offering to sell us paintings or give us taxi rides surrounded us.   Sienna felt a man tap her arm repeatedly and snarled, “Pa manyen mwen” which means “Dont touch me!”. Suddenly we recognized with much chagrin, that it was our hired driver!  She apologized over and over, and he just laughed and thought it was great that she could speak Kreyol!

We met new friends at the guest house tonight and shared our stories and photos of the fantastic places we’ve seen.  Only two more days then home to Memphis. 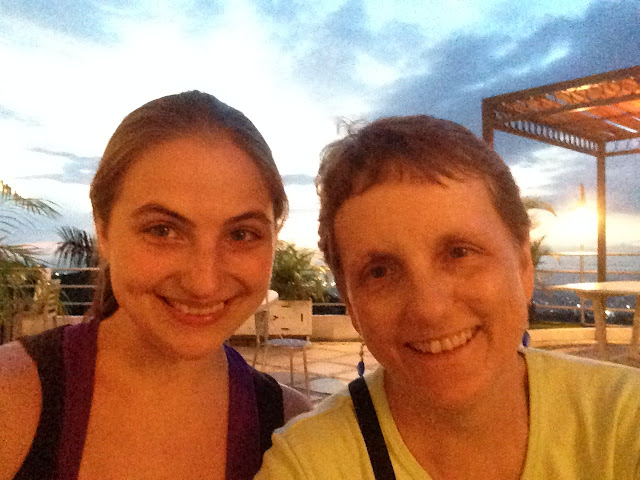