Sans Souci Palace and the Citadelle

I cannot believe I am sitting on a gorgeous beach in Okap(northern district of Haiti) drinking a pina colada and watching Haitians and American tourists play in the surf.  Sienna is out cold on the bed in our beachfront hotel room, under a fan with the breeze blowing through.  My chair is in the shaded protection of a large almond tree as I try to recount the marvelous things we saw and did today.
Leaving the lovely and restful Hotel Roi Christophe reluctantly, we climbed in a van with Moise, our driver, who arrived on time and smiling.  First stop the village of Milot, to pick up our informative and friendly guide Maurice.  We asked him to speak only Kreyol with us, after explaining my daughter’s studies and my attempts to learn.  He happily obliged, so the rest of the day we heard the history of the Haitian revolution and all about Henri Christophe, Jean Jacques Dessalines, and Touissant Loverture in his native language.  It was quite compelling to be standing within the palace built  after Haitian independence was declared Jan 1, 1804, and hear this man proudly tell of his people defeating the strongest army in the world, the French.  How Napoleon sold Louisiana to Thomas Jefferson so he could return to reclaim Haiti (that didnt work, obviously).  How Christophe and Dessalines fought in the American Revolution in Savannah Georgia, recruited with many Haitian soldiers by General Lafayette (I’ll have to check his facts on that one) The sad tale of Prince Noel (younger brother of Christophe’s wife and queen, Marie Louise) who died in an accident with gunpowder.  Marie Louise was Italian, born in Haiti to Italian immigrants.  When Christophe killed himself (more on that later) she returned to Italy with her two daughters. (neither had children-we asked, thinking there might be royal Haitian family still living somewhere in Italy)
Christophe wanted to build a palace to rival Versailles, complete with gardens. His magnificent creation was damaged in the earthquake of 1842 and abandoned.  What we saw today was a palace of brick and stone, with lovely arched doorways and windows and fine views of the mountains all around. They had a hospital and printing press and a place to greet international visitors.  Christophe corresponded with heads of state including the Czar of Russia.  We went in the morning and the air was cool. There were half a dozen young Haitians studying their homework; one girl working on chemistry problems of all things. No other humans invaded the grand space and we wandered from room to room, mouths hanging open and cell phone cameras flashing. If you are friends with my daughter Sienna on Facebook you can see more photos than I’ve included here.

Leaving the palace, whose name Sans Souci means “no worries”, we climbed back into the van for another “off road adventure” Haitian style.  Picture driving up a stoned road with switchbacks for 20 minutes, then arriving at a “way-station” where you meet your horse and guide for the last push up the mountain to the Citadelle.  Being warned by Tim and Mimi Baker, who have done this before, I was prepared for this!  The guides instructed us to lean forward on the ascent and backward on the descent. Right.  And dont fall off when the horse shifts his weight to stop for bodily necessities!   We climbed for 25 minutes, up and up and up.  The road was well maintained, restored during Jean Claude Duvaliers administration, we were told.  We saw several people working on it today.  Ispan is the government ministry responsible for maintaining the historical monuments of Haiti, and as far as I can tell they are doing a good job. 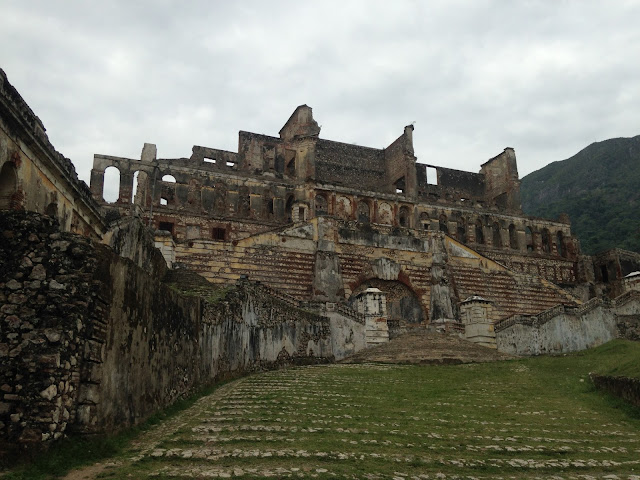 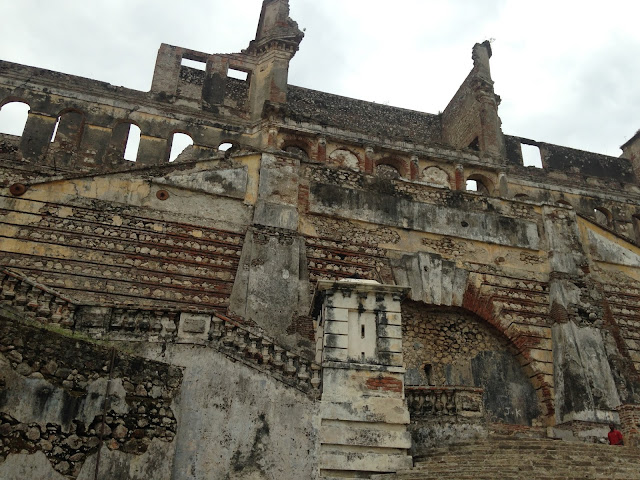 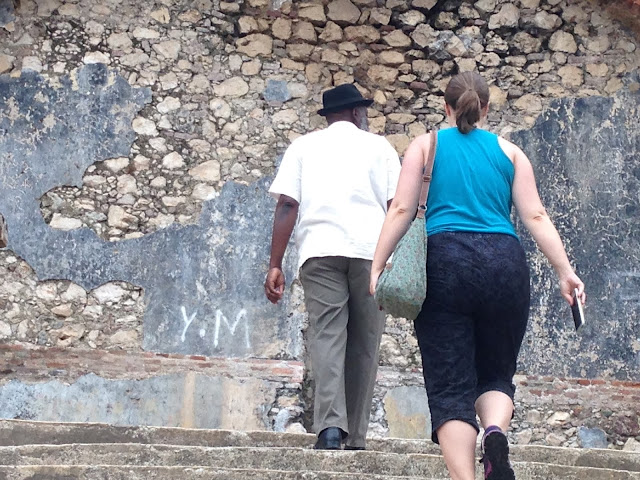 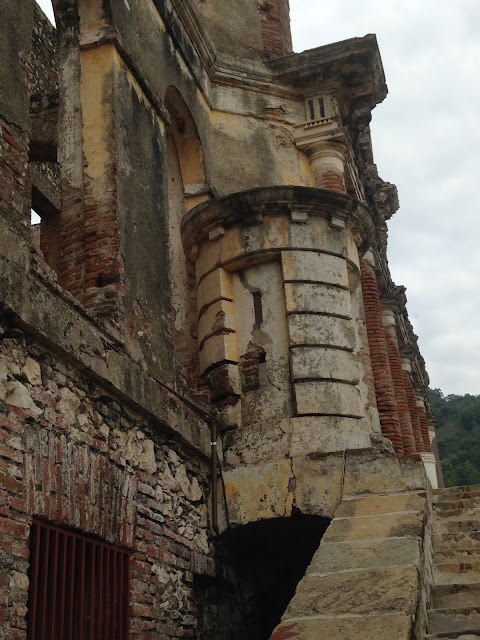 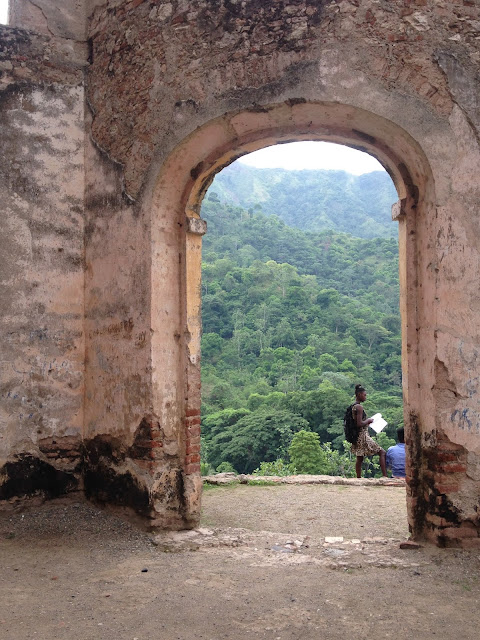 Sienna is reading the Game of Thrones, and as we walked and climbed through the Citadelle today she remarked how it seemed similar to the old french castles she saw in Europe last year.  Rows of cannons looking out through windows called “murder windows” (I dont remember the french name!). A grand aqueduct system built by the Haitians that still functions today to collect water and bring it down the mountain. At one time 6000 people lived at the Citadelle, and we saw the giant bread ovens used to prepare food for so many.

After Haitian independence, Jean Jacques Dessalines was the ruler of Haiti, similar to our George Washington, the guide told us.  Sadly, Dessalines was assassinated by Haitians.  Christophe and Alexandre Petion both wanted to rule Haiti after that. Christophe ruled in the north and Petion in the south.  We now have Petionville, a city  near Port au Prince.  Christophe apparently suffered a stroke,leaving him  partly paralyzed on the left side.  When Petion heard that he sent troops to conquer the north and Sans Souci.  Apparently this is the reason Christophe shot himself at Sans Souci, to avoid the disgrace.  We stood in the room where this happened, as Maurice described for us the sad tale.  Looking up at the majestic structure, I felt the loss of the dream of this man and thought about the structures man builds to show off his strength and power, which all come to naught in the end.

After climbing through more chambers, batteries, and vast empty rooms we rested at the top where we could see the mountains all around us and the drawbridge below.  Maurice was patient with our many questions and was happy, I think, to be giving his tour in Kreyol.  Very few people, even Haitians, ask for the tour in Kreyol. “They all want to speak in French”, he told us. We talked about Kreyol being an oral language only until about 30 years ago.  Now the Haitian children learn Kreyol AND French and English in school, which we all agreed is wonderful.  There is a great need for more schoolbooks in Kreyol. Pas Ti Pas, the Haitian expression for “little by little”

We also agreed that Haiti’s greatest asset is her young people.  He described Sienna as a “citizen of the world” which is a great compliment.

Descending down the mountain on horseback was mildly alarming, especially when the horse wanted to catch up with his “lady friend in front”, the guide told me.  He put me and my horse in front after that, so no more funny business.

Tipping is always confusing in Haiti, as I never know how much is fair.  Fortunately I have learned to ask other Haitians this important question, so Maurice had prepared me and I gave each of our horse guides $5. There were three of them.  The first man quietly said to me, “you can give me $10, if you want, I wont tell the others.”

Back into the van again, and it was only 12:30 PM, and still blessedly cool.  Maurice took us to Lakay Lakou, which he is creating as a “cultural center” in his village of Milot.  Arriving there, on the rooftop we were greeted by his wife with a bowl of fresh water and a bar of soap to wash our hands.  Se magnifik!  Lunch prepared graciously by Madame Innocent (a fine name) included carrots, potatoes, some type of green beans, onions, and tomatoes, all directly from her garden.  Chicken, killed that day she told us.  Picliz, Very Hot!  Brown rice.  For dessert, mango and cashew, the fruit of the same tree that gives us cashew nuts.  It tastes like bread pudding, absolutely delicious.  Again from their garden.  And finally, coffee, ground from their own beans from their own tree.  Hows that for Haitian immersion?

Sad to leave this welcoming couple and their obvious love for Haiti, we climbed again into the van   at about 3:00, to head for our hotel, Cormier Plage.  Again a mountain road, this one narrow, unpaved, through back country not obviously inhabited by anyone, much less a resort hotel?  Just sit back and enjoy the process, I have learned to tell myself.  What comes next will be even more wonderful than what you just left behind you.  Of course, what happens to a fifty something year old woman after a fine lunch with two cups of coffee when she rides on a bouncy road for thirty minutes?  You know what Im talking about.  I was about to ask for an old fashioned stop alongside the road when we arrived at our hotel.  Another botanical paradise, rivaling anything I saw in Hawaii.  Our room is beachside, and we have all evening and tomorrow morning until noon to enjoy it.
Truly I must pinch myself, or at least write all this down to preserve these memories. 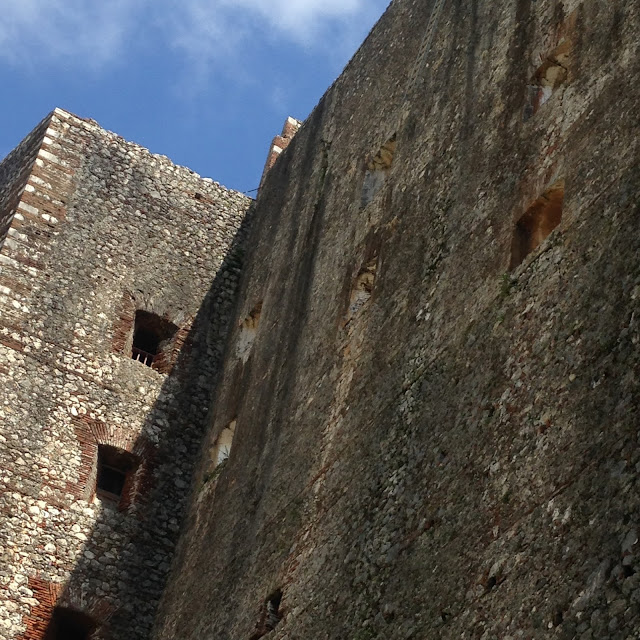 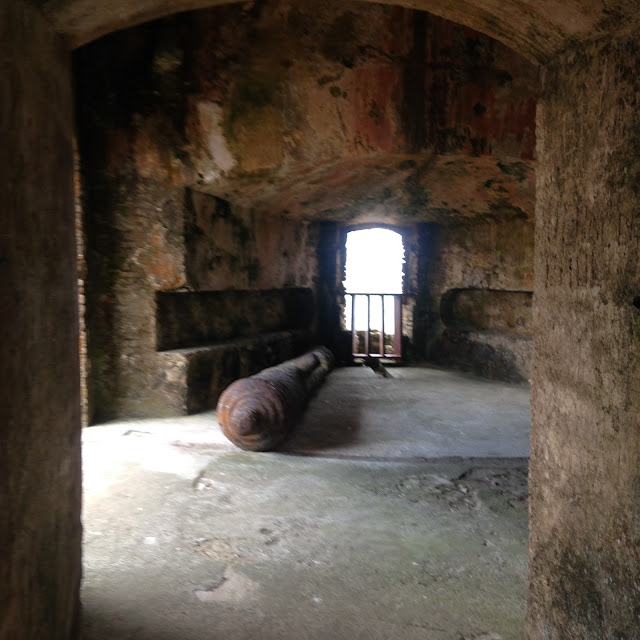 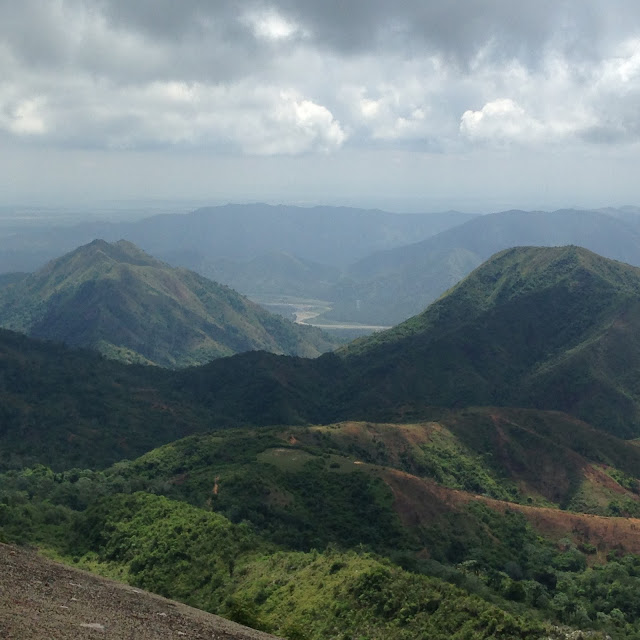 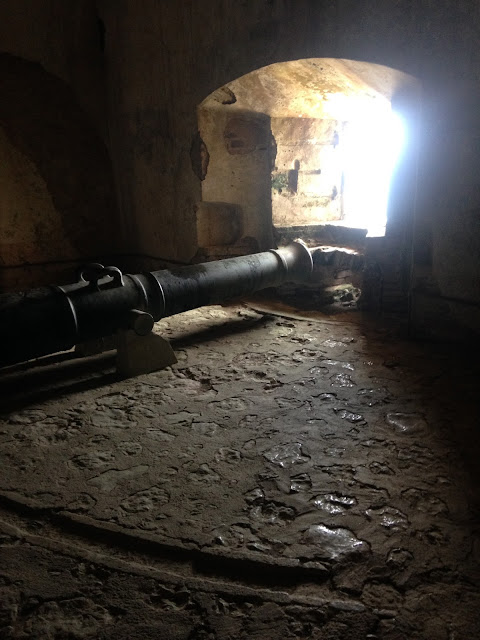 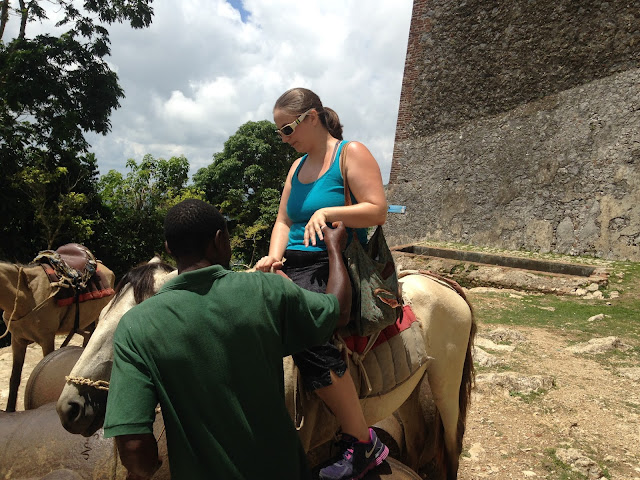 Sienna and I promised each other we will someday return to magical Cap Haitian and its treasures.