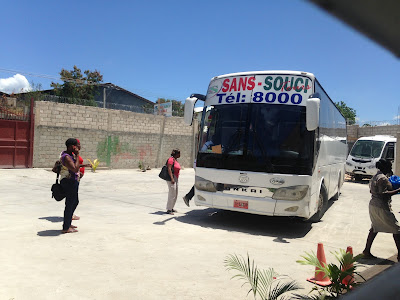 Today we traveled to Cap Haitien via the Sans Souci bus.  Speaking Kreyol is a huge help with understanding “check your bag over there” and “here is the waiting room” and “the bus leaves in 30 minutes”. We did NOT realize we had assigned seats, however, as there were no visible signs or numbered seat designations, only Haitians asking us to please move out of their seat!  A helpful woman showed us where to sit, and off we went, pulling out of the station promptly at 9:05 am.  The bus, to our pleased surprise, was a large comfortable AIR-CONDITIONED affair like any tour bus in the US.  Complete with TV screen, playing a Haitian soap opera, but  minus the bathroom.  We stopped along the road at one point, in the countryside, and a woman took her small daughter off the bus briefly.  I realized that was a bathroom stop and hoped it would not be the only option, as it is a six hour bus ride to Cap Haitian! (Okap). 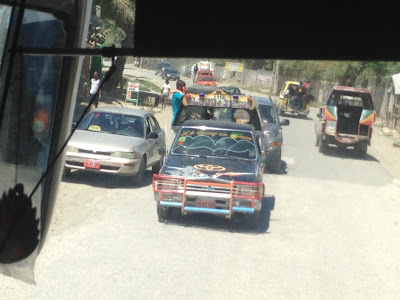 Reflecting on our progress north through Haiti, I asked myself which type of road do I prefer? A paved road that curves and twists up the mountain?  Or a straight UNPAVED road?  Once we got about 50 miles out of Port au Prince, those were the two choices.  I figured the pavement ran out in St Marc and they hadn’t gotten around to repaving the northern part of the highway yet. We did see a few road crews at work, with heavy machinery in evidence, so perhaps the road to Okap will be better next time.  The unpaved road is gravel and filled with holes, some of them 12 inches deep and 3 feet across.  The driver is obviously experienced and moves from one  side of the road to the other in order to avoid the deepest ones.  Like Mark Twain navigating the Mississippi, I thought.  Careful drinking from your water bottle because you might chip a tooth on the next bounce. I think I have bruises on my back from banging into the seat over and over, despite the cushions. The driver blared his horn at every blind curve to warn oncomers “Nou La!”. We’re here!  This meant loud horn blasts every 30 seconds or so, for the better part of 3 HOURS! May I observe that “personal space” as defined by Haitian bus and truck drivers, has a different meaning than we Americans are used to.  Our travel agent had advised us to “sit on the left side of the bus, you’ll see better.”. The better to see the oncoming Mack trucks!
Mercifully there was a 30 minute stop halfway, for bathroom break and lunch break, in a roadside station built just for that purpose.

Back on the road, we see miles and miles of hilly countryside, most of it looks farmed.  Who owns all that land, I wonder?  The sun is so bright I need my sunglasses, even through tinted windows.  There are rare signs of human dwellings or buildings, other than the omnipresent BANK-LOTO buildings one sees everywhere in Haiti.  Concrete buildings the size of a Texas outhouse, with Pere Eternel (Eternal Father) often painted brightly on the side.  No houses or buildings to speak of for miles, then there is a BANK LOTO building.  Apparently every community in Haiti has one?  Then there are the groups of school children in their uniforms, usually 10 at once, walking along the highway by the dozens and dozens.  There must be schools somewhere hidden in the plaintain groves down the hillside.  Occasionally I see a half finished concrete dwelling, empty now, with arched doorways and windows and a 12×12 pile of cement rubble in the dirt yard.  There are hundreds of these in Haiti as well, and they all look the same.
Other Haitian mysteries include: how can a woman carry what looks like 50 pounds on her head without holding on to it?  The Haitians lay their clean laundry out to dry on the roadside, on what looks to me like bare dirt.  How do they keep their clothes clean?

Arriving at the bus station in Okap, we were quickly greeted by our taxi driver and drove through the “City of Independence” to our Hotel Roi Christophe. 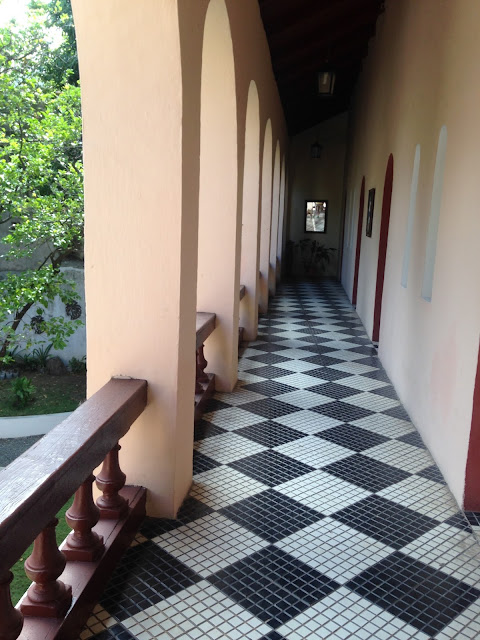 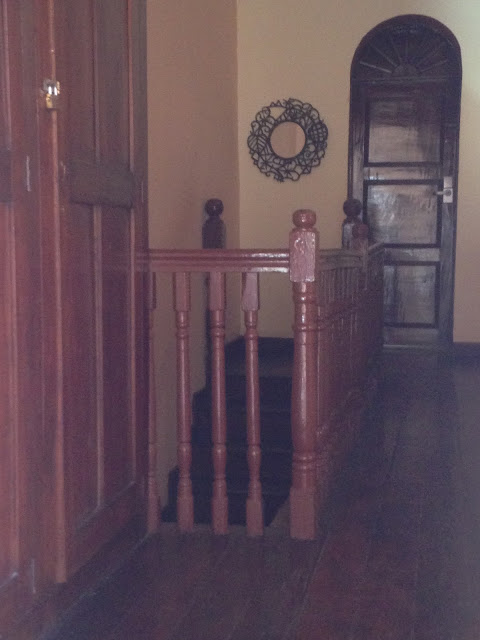 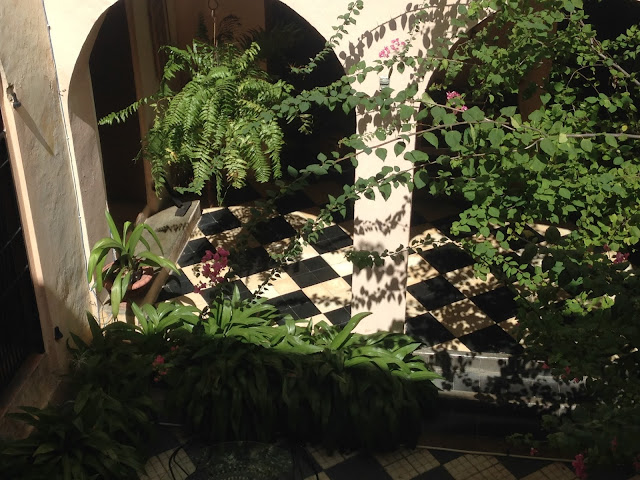 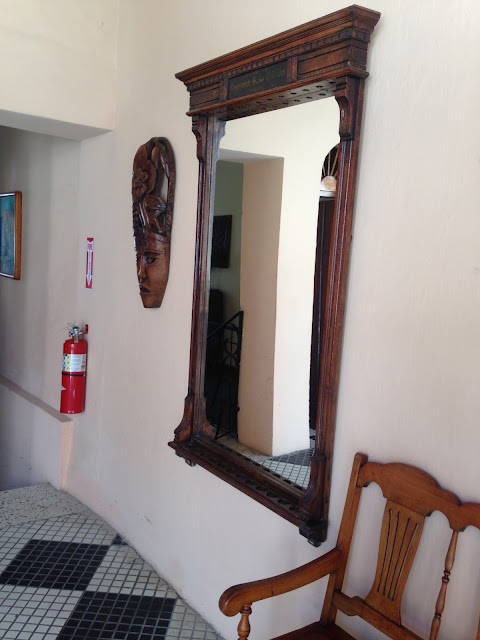 Henri Christophe was one of the leaders of the Haitian revolt against the French, and built himself a fortress called the Citadel. He declared himself king and built a palace called Sans Souci (“without worries”). We visit both places tomorrow.  I noted the city of Cap Haitien seems to have a slightly more permanent feel to it than the crumbling chaos that is Port au Prince.  There are actual storefronts here, with doors instead of huge locked metal gates.  The hotel entrance is open to the street, and a cool breeze has been our company since we arrived.  Gorgeous mahogany furniture fills the rooms and hallways, and there is the usual profusion of colorful botanic life.  Sienna and I enjoyed passion fruit ice cream (intense flavor, like nothing I’ve ever tasted before) 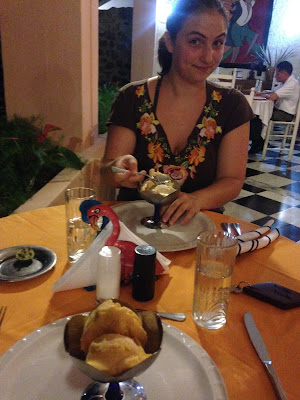 and then our feet in the swimming pool before retiring to our room.  Truly a luxury vacation. 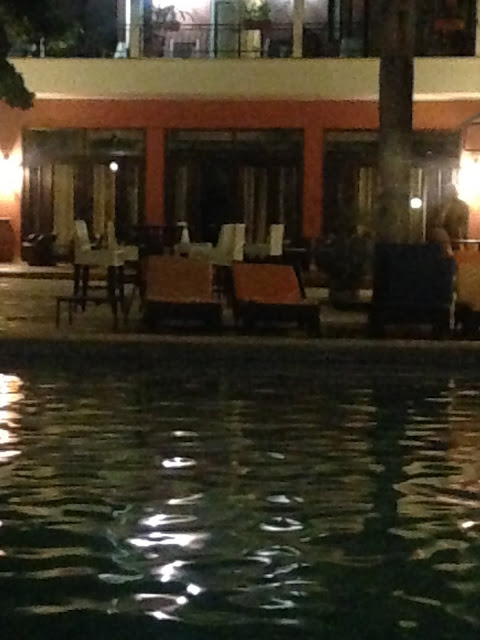