Posted on May 27, 2015 by Susan Nelson
Morning coffee overlooking the bay at our hotel, listening to the crashing waves on the rocks below.  Sienna and I walked down to the beach after breakfast, but decided we did not want to swim. We preferred to go back into town to meet our gracious guide, Michel, for more touring of Jacmel. 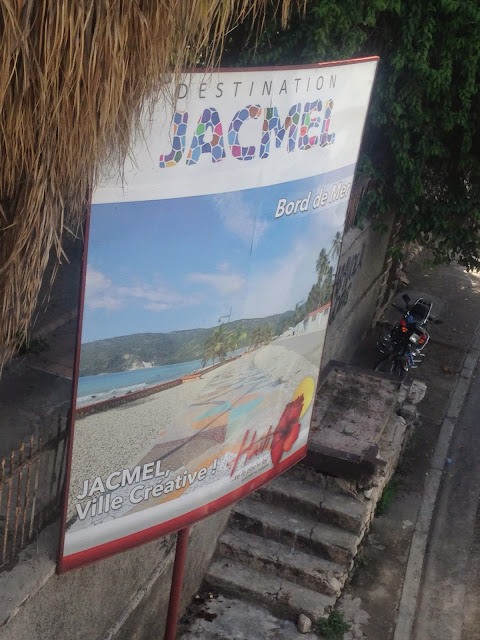 We caught a ride into town with another group of Americans from Detroit, and met Michel at the hotel Florita.  Quick trip to the ATM and we were on our way!  Sienna had her eye on a  drapeau (sequined flag) she had seen the day before, with La Sirene beautifully created in bright colors.
Unfortunately the gallery owner would not come down on his price, so we left it behind.  After a return visit to another gallery for a painting of Jacmel and the sea painted in the shape of a guitar, we again left empty handed as the price was over $300.  At that point Michel offered to take us to another gallery “where the prices are cheaper”, but we would have to get there by moto-taxi.  In other words, on the back of a motorcycle!  What the heck, we said, and off we went.  Zooming through the streets with the wind on our faces was so much fun! 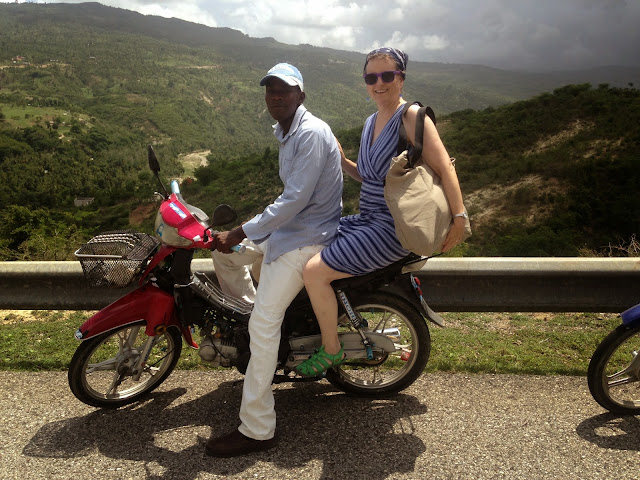 We found Wilbert Laurent in his house with all his paintings displayed, and enjoyed meeting the artist and hearing him talk aout his work.  Sienna finally settled on a painting of Carnaval and another of Jacmel and the sea.  Not to lose the advantage of two Americans in his gallery, Wilbert offered us any small painting for $25.  She chose a painting of donkeys (bourrik) drinking in the river.  All three paintings for $150, we considered quite a deal especially having met the artist in a hidden  alleyway reached by moto taxi, with wild hibiscus growing on the post and a child singing from the house next door. 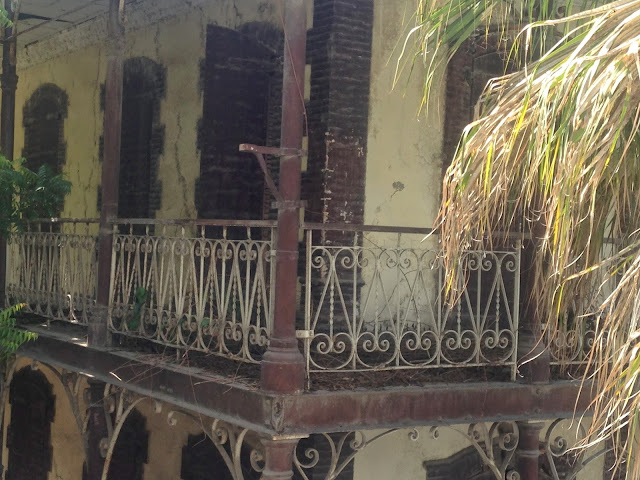 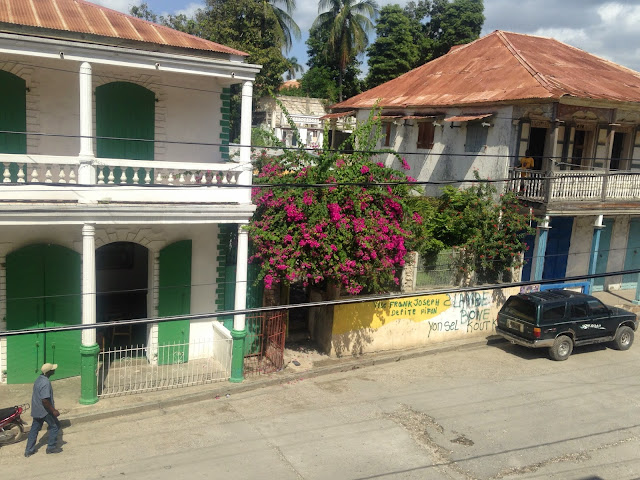 Returning to Hotel Florita, we lunched on  grilled fish, plantains, picliz and Haitian spaghetti.  This usually has tomatoes and carrots, green pepper, some chicken.  I told Michel I wanted to eat whatever he recommended, and I was not disappointed with the blackened fish seasoned with lime juice.
After lunch Michel wanted to know, would we like to see Jacmel from the mountain, the same view that Sienna bought in her painting that morning?  Of course, we said, especially if it meant another ride on a moto-taxi!    A truly Haitian immersion experience.  Michel is very proud of his “village” of Jacmel, “La Bel Femme”. We spoke all day today and yesterday only in Kreyol, and now I find Kreyol phrases filling my mind as I write. Apologies to my American readers.  Sienna is my tutor so that I say “Where are we now?” instead of “Where we here?” and other grammatical faux-pas.
Saying “orevwa” (goodbye) to Michel was only possible with promises to return and bring our friends to experience his beautiful “village”.
Tonight we are resting at the guest house in Port au Prince, for tomorrows 6 hour bus ride to Cap Haitian. Learning to have no expectations about anything, we dont know if the “Bus Sans Souci” is a tap tap or an air-conditioned luxury bus.  Probably somewhere in between.  Whatever happens, we feel safe and privileged to be enjoying this amazing country in so many ways new to us.
This entry was posted in Stories & Updates, Uncategorized. Bookmark the permalink.