Last time we came to Jacmel I remember a terrifying ride through the mountains, but this trip was pleasant and completed in exactly two hours.  We complimented our driver, Geffrard, for not scaring us to death!  Jacmel looks a lot like New Orleans, Sienna kept saying all day.  There are mosaic tiles decorating many walkways and walls, and historic buildings which have been restored since the earthquake.  Artisan galleries filled with treasures!  Our guide, Michel, was pleased that both of us speak Kreyol, and promosed to speak only Kreyol the rest of the day.  Haitians are very kind and generous to visitors; he told me if I live in Jacmel for one month I will speak Kreyol better than him!  Pa Vre!  Not true!  But it made me happy anyway.

All around Jacmel the land is farmed, with abundance of mango, plantains, coconut, cacao.  Michel told us the people have plenty of food but no money.  He hopes that tourism will continue to come to Jacmel.  It is certainly a lovely city, safe to walk around in, if a little HOT in the afternoon sun!
After a refreshing Coca Cola ( made with sugar cane, absolutely delicious and ice cold) our driver took us to Bassin Bleu.  This is a series of three waterfalls. Getting there was an off road adventure, with gravel or dirt roads filled with potholes.  At one point we drove into a lake.  I am not kidding.  Folks come to this lake, which turns out to be only 8 inches deep, to wash their motorcycles, their cars and their clothing.  We saw women laying out their newly washed clothes on the rocks.  Haitian laundrymat and car wash combined!

After that mildly terrifying experience we climbed a steep road (I use that term conditionally) with hairpin turns up the mountainside to reach the village of Bassin Bleu.  Leaving the van, we asked about changing our clothes into our bathing suits.  “There will be a changing station at the falls” we were told.  Sienna and I both speak Kreyol, and we are certain that is what they said.  More on that later
Its about a 3/4 mile hike to the first “basin”.  As they say in the hiking guides, “a strenuous climb”.  The path is covered in stones part of the way, littered with mangoes which give off a sweet smell as you walk.  At one point one of our two guides picked up a rope.  I asked Sienna, I wonder what that rope is for?  I could only imagine.  Reaching the final “basin”, the two guides attached the rope to the top of a cliff and indicated to Sienna to climb down.   Right.  We could not see the cliff face, only a sheer drop down to the rocks below.  I am eternally grateful to my daughter for going first!  She held onto the rope, Seville (the guide) climbed down ahead of her and showed her where to put her feet, and over the cliff she went, out of my sight.  She kept hollering reassurances to me that “really, its not that bad, Mom!”. Then it was time for the old lady.  May I say rock climbing has never been one of my skills. Yet with the gentle but firm assistance of the two guides, I made it in one piece to the bottom of the cliff.

Here we could see the waterfall and the catch basin, magnificent.  And….where do we change our clothes.  Right here, of course!  Standing on the rocks.  Great.  No shame, Sienna says, we’re in Haiti.  Yep. 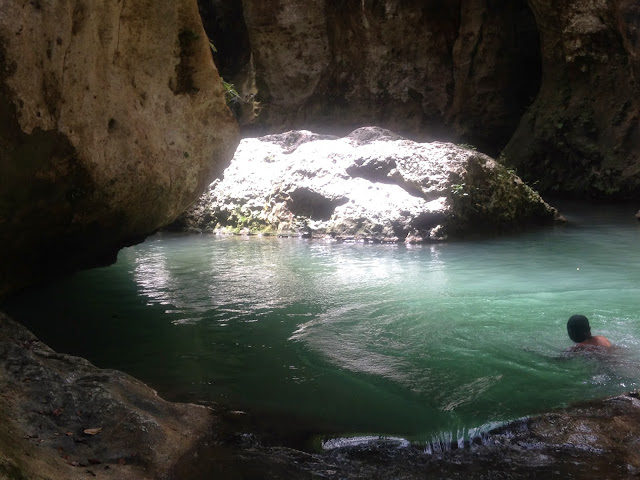 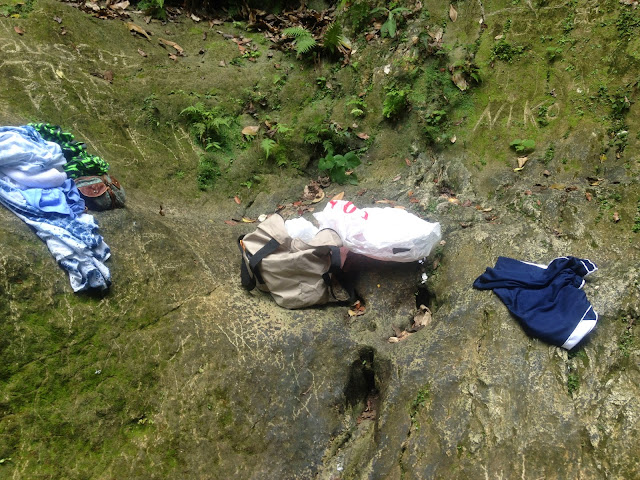 Climbing into that cold water after that hot climb and life threatening descent down the cliff was incredible.  Sienna and I stayed there for over an hour, relishing the beauty and sheer incongruity of it all.  Our guide climbed to the top of the waterfall and jumped off into the basin below, for our viewing pleasure!  What a paradise is Haiti.  No wonder the French called it “the Pearl of the Antilles” 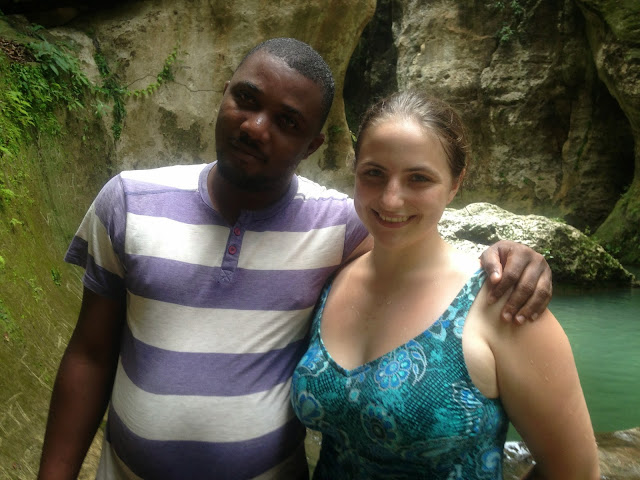 Returning to earth, as it were, we completed the reverse trip without incident.  I told Sienna I was giving our two guides a huge tip for not letting me fall to my death and for encouraging me all the way.  We were so exhilarated!

The final gift of the day was arriving at Hotel Cyvadier, which is directly on the ocean.  Waves crashing and beautiful vistas were the backdrop for our dinner of paella and shrimp creole.  Sienna said she wanted to go down to the beach after dinner, but we could barely finish our meal without falling face first into our plates.  We decided to visit the beach in the morning 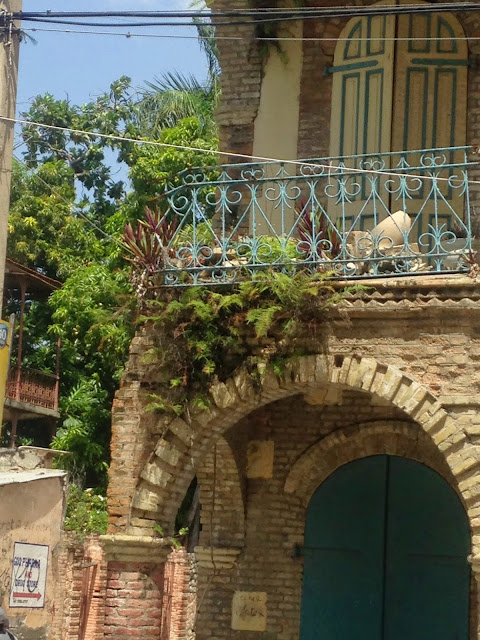 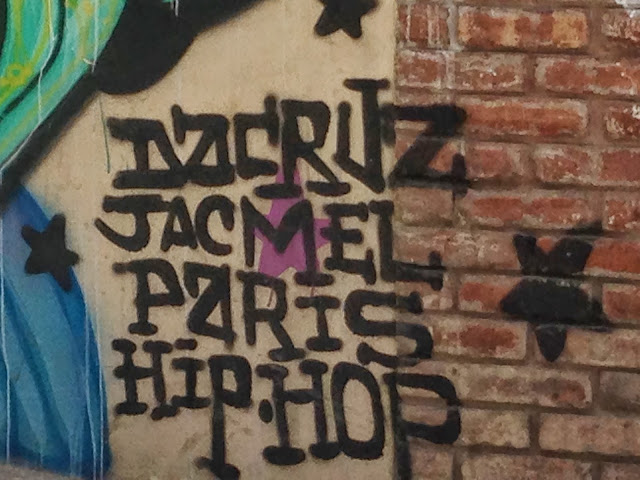 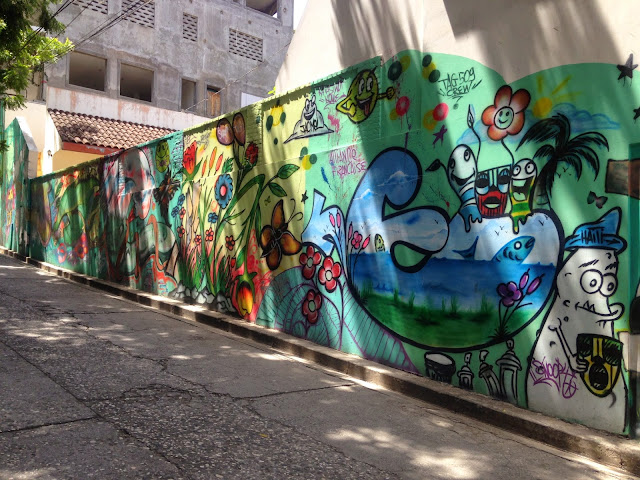 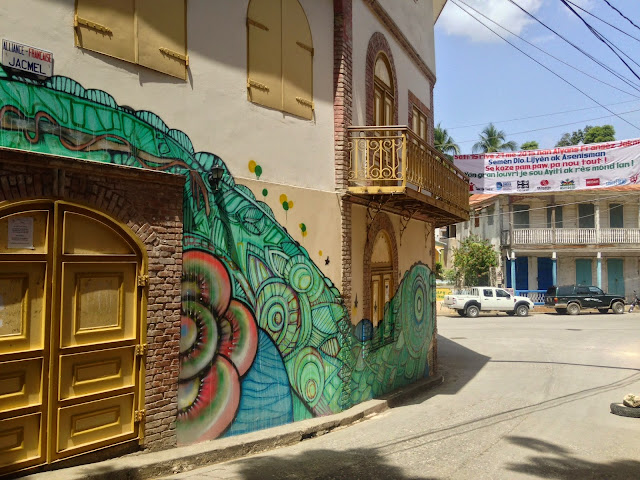 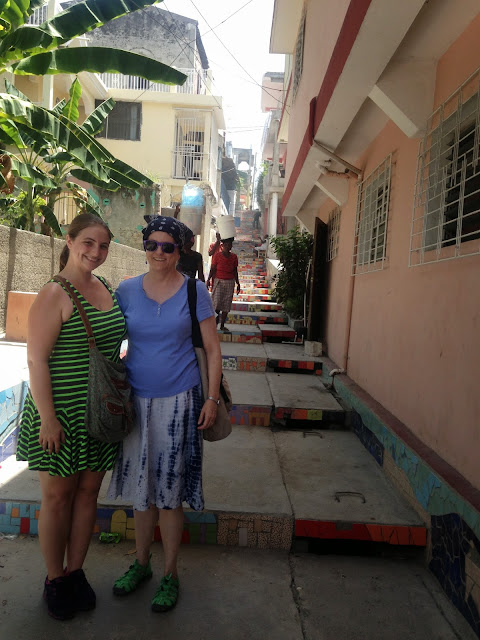 Now I am having my morning coffee at the same table, with the lovely waitress Diana bringing me fresh mango and pineapple and banana.  Sienna is still sleeping, as it is only 6:30 AM.  Another day in the heartbreakingly beautiful paradise that is Haiti.