UNTO US A CHILD IS GIVEN

One morning as we were sitting at breakfast, someone said, “I think there’s a baby left by its mother in front of the clinic”.  Someone else confirmed, “Yes, I thought I saw a baby lying on a bench, but I wasn’t sure with the crowd of people whether she was with anybody”.  Usually there were about 50 people waiting each morning for clinic to open.  They gathered on the chairs and benches set out for that purpose, mothers (and sometimes fathers) with their children.  The crowd was a common sight in the early mornings, so one small baby would not attract much notice.  Something told Jill, one of our deacons, to investigate.  I suddenly lost my appetite and followed her downstairs.
There were dozens of people sitting and standing in a crowd waiting in front of the clinic, but one baby girl was lying on a bench, crying.  It was clear no mother was around to comfort her.  I picked her up and held her in my arms, and her crying stopped.  She was about 5 months old and was just getting her first baby teeth.  She had on a clean dress and was wrapped in a soft yellow blanket, and her hair was carefully braided.  Someone obviously loved this child.  Her forehead was larger than normal and her eyes focused in different directions.  She could see me, but only by looking at me out of one eye at a time, and she had trouble looking straight at me.  It was clear she had some type of birth defect, perhaps hydrocephalus (a condition where the brain’s fluid can’t drain properly so the skull bones swell).  She also had a rash covering her arms and legs and the soles of her feet.  Other than that she looked healthy and well fed. We later diagnosed the rash as scabies and gave the staff an ointment to treat her.
By this time most of our other team members had gathered around me and the baby, and we were the focus of attention of the rest of the crowd as well.  We were convinced by now that the baby’s mother had left her behind.  Handicapped children can be a challenge to raise even in the best of circumstances.  Perhaps the mother felt she could no longer provide the best care for her baby.  She brought her to the school where she knew her baby would be protected from hunger and perhaps given a chance to grow up at the only place in Haiti where handicapped children can receive an education.
After a few minutes, Ollie Rencher, a priest on our team, led us all in prayers of Thanksgiving for the child out of the Book of Common Prayer (****) We were standing under the big tree in the courtyard, the one Sister Joan Margaret stood under when she founded St Vincent’s school 50 years ago.  We took turns holding her as tears streamed down our faces.  Soon one of the staff, Madame Merita, joined our group and took the baby girl upstairs to join the other children. Just like that, she was now part of St. Vincent’s.  She quickly received the name Margaret Vincent.  Jean Robert, our translator, named her after the school’s founder.
The school is not equipped to care for infants, and consequently had no diapers her size or baby bottles to feed her with.  Of course our team promptly sent one of the staff with some money to a local store to obtain the necessary supplies.  This operation is not as easy as you might think, but eventually a few diapers and baby bottles appeared.  Someone even produced a box of baby wipes, which I don’t think Madame Merita had ever seen before and which she found extremely useful!  Madame Merita is the same woman who has cared for Diana Vincent, the girl who was so sick when we first met her in November 2008, she couldn’t raise her head off the pillow.  Now she is growing strong and learning to take a few steps.  We knew baby Margaret would receive the same loving attention. In fact, there were times when our team would have baby Margaret with us and Madame Merita would come looking for her, worried about where her baby had gone.
Allie, one of our team, became particularly attached to Margaret and spent much time holding her and loving her.  Ollie came up with the idea of having a baptismal ceremony for the baby, and Pere Sadoni asked Allie to be the baby’s Godmother.  That Sunday afternoon we all gathered in Pere Sadoni’s office.  Ollie and Pere Sadoni had beautiful white stoles around their necks.  Someone found a white towel to wrap the baby in, while Madame Merita held her.  My son, Adam, played “Seek Ye First” on his guitar as the ceremony began.  Allie was the child’s godmother and Jean Robert her godfather.  We all renewed our baptismal covenant, first in French and then in English.  A champagne bucket that had served as our ice bucket during meals was used as the ewer, and Jill poured the water into a plastic basin as Ollie prayed Thanksgiving over the Water.  As Ollie baptized Margaret Vincent in the name of the Father, and of the Son, and of the Holy Spirit, I thought my heart would break.  God is with us.  Emmanuel.
The staff had baked a tiny cake for the occasion, white icing with pink roses.  Such care given to a little one whose handicap had been too much for her mom to handle.  I wondered about the mother and cried for her too.  I pray that she will be comforted by God, but I can only imagine what she must be feeling or thinking.
As we return to St Vincent’s we will have the privilege of watching baby Margaret grow up alongside her sister Diana.  Thanks be to God for providing St. Vincent’s school, a place for these children to grow and learn and be loved. 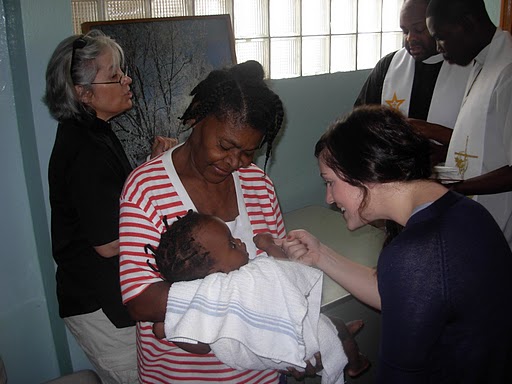