Thursday in Haiti with Lee Warren 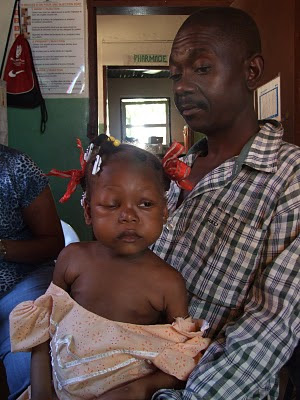 Dear Family Friends,
It’s 8:30PM and the day is still full of eventful God-incidences. Let’s start at the beginning and only with a few stories. I’ll try to add a picture or two, but the Internet is slow.
The mother with the little baby who we fed yesterday with a syringe returned. It was my job to teach her about bottles and formula, feeding and burping. I could not imagine this baby getting enough milk through the night with a syringe so when the mother placed this tiny infant in my arms I was quite alarmed that he may be too weak to eat. I had to show her how important it was to wake him up and I held my breath that I would not be able to do it. When that little baby began sucking for all he was worth, I lost it. I fed the baby and someone else wiped my tears. That’s what being tired and a new grandmother does to you.
Later in the day I went through this same drill with a baby whose mother was killed in the earthquake. A relative brought the baby in with wounds that now had Staph infection. This young girl was not a mother so once again I had to teach how to make formula, 1 scoop “let” to 2 scoops “dlo.” I’m learning a little Creole by now, you see. Several patients later I got promoted from taking vitals to taking care of wounds, the first being those of a little girl hit by a motorcycle.
What is important to know is that we are seeing too many children who are suffering from malnutrition, especially kwashiokor and marasmus. (you can Google that yourselves) The latter is caused by lack of protein. These children are swollen in their legs, faces, limbs. (see picture) The first day the doctors were calling me for Stop Hunger Meal bags because they are protein packed, but I have no more. What the the doctors have seen, however, is that our meals offer a vital nutrient rice alone does not.
We saw well over 300 patients today, including many dental patients. The Haiti Mission needs dentists!!
I thought my day was over when I finally opened my laptop but then 3 men arrived from Port-au-Prince who are here to organize the reception, storage and distribution of a shipment Royal Caribbean is sending down here. I SKYPED Rod Brooks our CEO and it turns out Allen Renquist, our Dir. Of Distribution is in FL working to get SHN goods on this ship!!! We all agreed we had once again spotted God at work. 🙂 I gave these guys some Haitian phone numbers they were lacking. Bon di Bon. God is good.
One more day and frankly if there’s not enough fuel to get us out of here, I’m okay with that, for just awhile longer, but not much longer.
Love,
Lee
PS. Glenn and Linda, thanks for feeding Charles!!!
This entry was posted in Haiti Earthquake Disaster, Lee Warren in Haiti, News from inside Haiti, Stories & Updates. Bookmark the permalink.