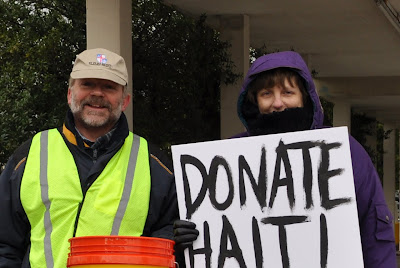 Starting at about 9 AM today, Sienna Nelson and Dumbledore’s Army stood at the corner of Perkins Extended and Poplar Avenue in Memphis, and collected $1 dollar bills and loose change from folks stopped at the traffic lights. A balmy 37 degree temperature with light mist and biting wind was the background setting for this event. About 18 volunteers came to help, and donations included at least one $100 dollar bill and a rather large check. Folks at the bus stop next to Sears threw in several dollars. One man told me he did not have a phone so he had been unable to donate to the Haiti relief effort until now. He gave me 6 dollars while he was waiting on the bus. 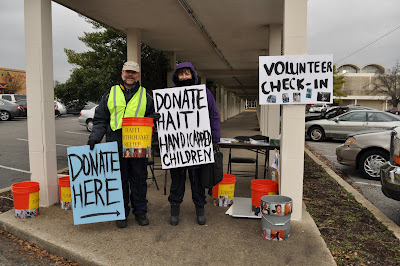 The police questioned us on two different occasions, but seemed satisfied to leave us alone as long as we stayed off the street. I didn’t point out to the officer that my daughter was walking up to cars and charming the drivers into making donations.
Our total came to $2356.41. Such is the power of one teenager.