reflections from Sonya about children’s orthopedic clinic at St. Vincent’s

The central hallway that runs through the clinic building was lined with
mothers holding babies, soothing crying children, nursing infants,
shushing toddlers—all waiting for their turn at the club foot clinic.
Parents came from miles around with their children, displaying an array of
leg and foot abnormalities. The lucky ones were able to walk on their own
or with limited assistance. But the majority were non-ambulatory, relying
on a parent or relative to carry them.

It was on the first day of the clinic that Dr. Bheki Khumalo, a podiatrist from Memphis (originally from South Africa) performed his first outpatient surgery of the
week on the very first patient. In a small square room with light blue
walls and a cement floor stood a single table covered in a white sheet.
Surrounding that table was a talented medical team that would change the
course of this child’s life forever.

She was an infant, no more than 1 year old—the sweetest little girl with
smiles for everyone and tiny laughs. With a simple set of surgical tools
and skilled hands, the tension was released on the child’s Achilles
tendon, the foot carefully set in the proper position and finally casted.
When one leg was complete, they set to work on her other leg, casting it
as well before the appointment was over. All the while, she cried little
and we were amazed by her cheerful temperament. (Author’s note: I cannot
imagine how incredibly hot and itchy her little legs must be in those
plaster casts in the Haitian sun. But what a small price to pay to have
the opportunity to walk someday. I had the honor of holding her after both
casts were applied while her mother went to the pharmacy—the highlight of
my day!) 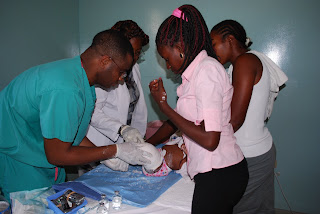 Hour after hour, infants and toddlers came to have their feet and legs
examined. The team consisted of Dr. Bheki Khumalo, Nick Pesce (a physical therapist from
Memphis) and Michele (a Haitian physical therapist).
Together, the team discussed each case in detail, determining how to best
treat the child within the means of the clinic. X-rays were studied
through the light of a single small window on the only exterior wall.
Debates ensued, weighing the pros and cons of each treatment plan (i.e.
would putting a child in a brace for the right leg cause damage to the
left hip). Many casts were applied and many referrals to hospitals and
specialists were made. Each appointment was complex and lengthy,
exhausting work in the heat.

As Dr. Eric had predicted during our trip to St. Vincent’s in February,
even though the clinic had few supplies, in the hands of properly trained
people, small miracles could be performed. And that’s exactly what we
witnessed day-after-day in St. Vincent’s clinic. Children who may not ever
have been treated were seen by a very talented group of physicians. Each
case was handled as if they were full paying clients in the United States.
Every effort was made to do the very most for each little person, to
provide the optimum care given the circumstances.

Imagine how much more can be done for these children when the permanent
clinic and surgical center are rebuilt on St. Vincent’s demolished
property.

This entry was posted in Reflections from Our Team in Haiti, Stories & Updates. Bookmark the permalink.