Hopefully She Plays the Flute 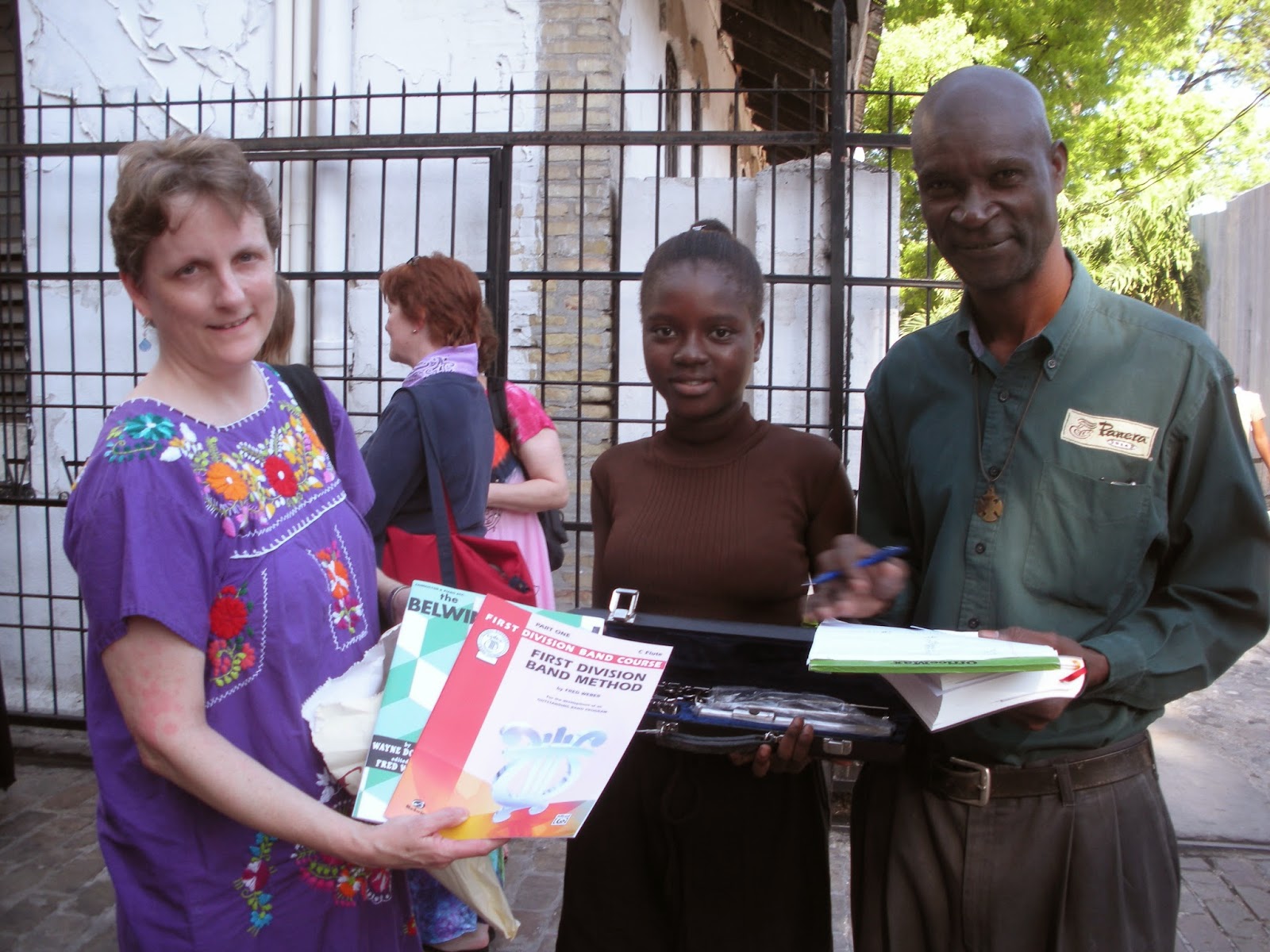 One of the treasures I brought with me to Haiti on this trip was a beautiful silver flute.  The request came in an email to me about a month ago, from Moliere, a Haitian man I have known for years.  Each time I see him we are at Holy Trinity Cathedral for Sunday services, and his friendly but broken English matches my earnest but broken Kreyol.  Having met his two daughters several times, I have watched them grow every year into young girls.
So when Moliere sent me an email last month telling me his youngest daughter was learning to play the flute, and had a music teacher but needed an instrument, I decided to see what I could do.
Thanks to the wonders of the internet, and a connection with Wendi Thomas, the message went out to a large audience.  I received a call from Gayle Rose, the Director of the Memphis Symphony.  Turns out she herself is a flutist, and felt drawn to the story of a young girl in Haiti who wanted to play.  Gayle presented me with a new “closed-hole” flute, making it easier for a beginner to play.  I told Gayle that I am sometimes asked why I would give a gift like a musical instrument to a child who may not get enough to eat.  Gayle’s eyes opened wide as she exclaimed, “Because music is bigger than life!”. My thoughts exactly, I grinned back.
So, with musical treasure in hand, last Sunday I searched for Moliere among the crowd at Holy Trinity Cathedral in Port au Prince.  He is a tall man and easy to spot, and hiw wide grin always welcomes me to Haiti.  After he introduced his daughters to me, they greeted me politely with the usual Haitian kiss on both cheeks.  Moddlaine and Myrielle, ages 17 and 15.  As I pulled the new flute in its case, with the music books, out of my bag, I tried to tell the story of its origin and generous donor.  The woman in Memphis who is the director of the symphony.  Brittany, our pharmacist, was looking frantically through her Kreyol-English dictionary to help me. “Patron” is the closest word we could retrieve.  “Li jwe flit” (She plays the flute). “Li vle ou aprann” (She wants you to learn).  I often tell people that I speak Kreyol like a 3 year old.  I showed them Gayle’s business card and explained again. The girls were extremely polite and did not giggle at my struggles.  So polite, in fact, that watching her perfectly composed face I was not completely convinced that Myrielle was excited about the gift.  Perhaps I had misunderstood the email message?  (which after all had been in Kreyol). Her father did all the talking. After much pantomime and Kreyol-English word salad, I said goodbye to Moliere and his daughters.  As we walked away, Brittany said to me, “HOPEFULLY SHE PLAYS THE FLUTE!”
My misgivings were erased the next afternoon in the middle of clinic at St Vincent’s school.  As I was examining one of the students, working with the CBU nurses, a knock on the door interrupted us.  We opened it and there stood a smiling young girl proudly holding her flute in its case.  Myrielle Julien was painted in big white letters across the black hard surface, with red hearts on either side.  Clearly she had claimed the flute as her own!  I asked her to play for me, and she happily agreed.  Placing her music book carefully in her lap, she played a scale.  Haltingly and carefully, like a beginner.  A musical connection between Memphis and Haiti has been born.

This entry was posted in Haiti Trip April 2014, Stories & Updates. Bookmark the permalink.