Posted on March 21, 2011 by Susan Nelson
On the second day of clinic we had, as I mentioned, about 50 people at once coming in to see the doctor. John Mutin taught Hannah and Sienna how to take blood pressures, check hemoglobin and glucose levels with a fingerstick test, take temperatures with an ear thermometer, and they helped us get the patients checked in. They are now officially our clinic assistants. Sienna complained at first that she could not take blood pressures because she could not hear the sounds, but she eventually became more comfortable with it. She told John she could not hear one patient at all, and thought it was her fault. Turns out the lady’s blood pressure was 240/180! Another patient had a glucose of 480 (normal is about 100). 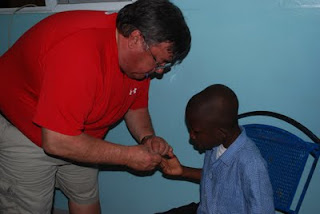 Hannah insists she cant speak French or Kreyol, but she ends up telling the other team members what is going on when the patients are speaking Kreyol.

Amy observed that we used every available person on our team to make the clinic work. This always happens; we soak up every asset we have to make the most of our time at St. Vincent’s. Our pharmacist, Wes, is in his second year of pharmacy school. He was a little nervous before the trip, making sure I knew he was not a licensed pharmacist. I told him dont worry, in Haiti you will be a pharmacist. He has learned to say “Take one pill every day” in Kreyol. (Pran yon grenn chak jou) Then he has to figure out how to say “Put two drops in each eye as needed for itching” Try that one! 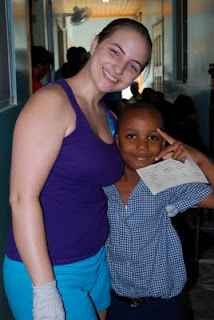 Sienna is the Pied Piper, wherever she goes she attracts children. Even at the guesthouse, when we walk down to the neighborhood bar (Casa de Cerveza- otherwise known as George’s place). Sienna was giving english lessons tonight to about a dozen Haitian children.
Tomorrow night will be our last night and we will take some pi wi li (lollipops) to the children of the neighborhood. The last day is always hard, saying goodbye.
This entry was posted in Haiti Trip March 2011, Stories & Updates. Bookmark the permalink.