Apologies for no report yesterday other than photos. (slightly delayed by a slow internet)

Had our second day in clinic today and saw about 60 kids with their teachers.  Most of the kids are reasonably healthy except for their handicaps. Sherye observed that the wonderful thing about St Vincent’s is that if you DON’T have a handicap, you are the odd one out.
Jody, a CBU nurse who works with children at St Jude’s, has a wonderful way with the children.  Many of them cannot stand on the scale, so getting their weight requires a creative approach.  Nurse weighs himself first, then picks up the child and weighs again.  Of course, Jody loves the job.  Kids with leg braces, kids with no feet, kids in wheelchairs. All smiling to be picked up by the “wolf – man”, the kids call him, because of his hairy arms. 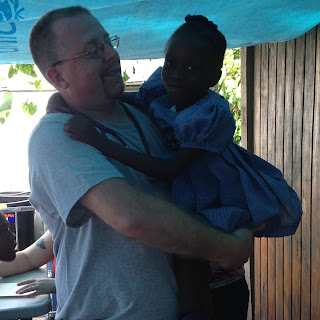 We found one child with a hemoglobin of 4.3  (normal is 12).  John said her blood came out “like water”.  In the States we would admit that child to the hospital for a big workup looking for some dread disease.  Here it is always nutritional.  One of the reasons we bring suitcases full of children’s vitamins with iron.
The record high blood pressure for the day was 230/108.  It was a patient I have come to know well over the years, one of the deaf teachers. We’ll call her Dixie.   Her blood pressure is ALWAYS high, despite my best efforts to bring her enough medication to keep it under control.  The conversation is always the same, “Did you take the medication I gave you when I was here last….March…..May….November….?”  “Yes, I take the medication.”   “When did you stop taking it?”  “When I ran out.”   “When was that?“.  “I take the medication until I run out”.    Time has no meaning in Haiti.  Symptoms such as cough are reported as happening “Since the earthquake.”  (Which was in 2010).  I have tried to bring enough medication for the staff to have for their blood pressure and diabetes, to last until my next trip.  For some, it seems to work, because their blood pressure and blood sugar are normal the next time I come.  Others, however, like Dixie, never seem to have any improvement.  I wonder if they take the medication, or lose it, or sell it, or only take it sometimes.
Sending partial post…..power going out.
Continued
I wonder how a woman can survive so long with that kind of high blood pressure.  I have been treating Dixie for 7 years, and am fairly certain I am the only doctor she ever sees.
On a lighter note, many of the boys and girls I know seem to have grown a foot since May.  Frenel, my good friend, who reads me his science homework in Braille, has grown 3 inches. In 6 months.  Some of the older girls now wear lipstick and talk about their boyfriends, just like kids anywhere.  It is a delight to be part of their lives as they grow.  Dieumene is studying English so she can go to University and study child psychology.  She wants to be a child psychologist and work in  Haiti with handicapped children, to tell them that they can do anything and not to be held back by their handicaps.  Dieumene has no arms and grew up at St Vincent’s.  Like many others, she has received an education here that kept her from begging in the streets and has given her a chance to grow and develop her potential as a human being. 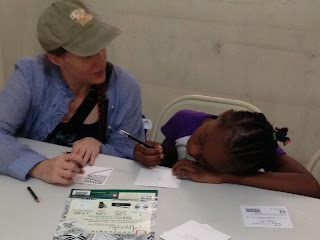 In the afternoon, we have arts activities for the children, sidewalk chalk to draw a hopscotch grid, beads and pipe cleaners for the blind children to make necklaces or other crafts.  It is a quiet time after the rush of clinic, and is my favorite way to spend an afternoon.  I often sit against one wall or in the corner, absorbing what is going on but not in the middle of it all.  It’s a great way to decompress.
During the week we read Morning Prayer every day after breakfast, and this week we read the parable of the mustard seed.  A tiny bit of faith growing into a big tree that can cover and protect all.  Our little bit of work in Haiti feels like that mustard seed, and I can see the tree growing year after year.  Its fun to watch.